Potato salad is always a summertime favorite. But how about if we kick it up a couple of notches and build a tasty Twice Baked Potato Casserole fully loaded with all of your favorite fixings? This hearty recipe was sent in from Sun City resident Linda Smith, and it’s a rock star side dish that she’s been making for years. Linda includes it in all of her special gatherings.

“I had a humongous four-day bash where friends and family from Omaha, Kansas City, Tucson and the Valley partied hearty on the fourth of July. My Twice Baked Casserole is always a hit because it’s so much easier to make than traditional stuffed baked potatoes. And it feeds a crowd. I always serve it with some type of beef.”

The minute you start building this sassy side, you can see why it gets devoured. It starts with the sweetness of cubed red potatoes and then layered with chopped crisp bacon, sour cream, cheese and green chiles with a burst of colorful scallions. Linda says she doesn’t often have leftovers to enjoy the next day, but it’s just as tasty if you’re lucky enough to save a little! This recipe can be made ahead and frozen (baked or unbaked) and re-heated when ready to use. Thanks Linda, for a great dish! I made a giant casserole of your Twice Baked Potatoes for a gathering recently and you’re right. Leftovers are hard to come by. 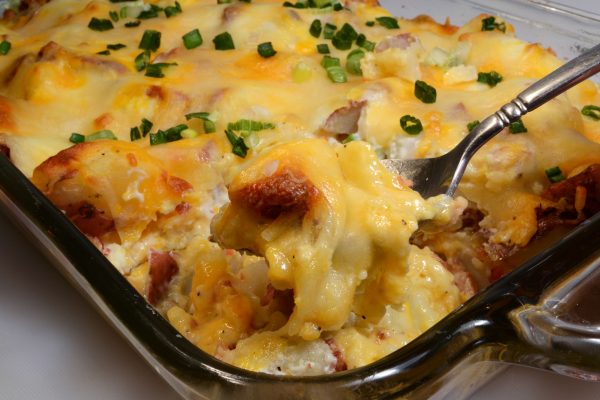