If you’ve got leftover Thanksgiving turkey, I’ve got just the recipe for you. How about a tummy-warming pot of turkey, baby kale and veggies in a flavorful chicken broth? This soup is healthful and hearty and a great way to use up some bread, veggies and turkey from your holiday feast. You can go with either white beans (like Northern Whites or Cannellini beans) or Pearl (Israeli) Couscous. Also, I’ve just discovered a new variety of kale. It’s called Baby Kale and it’s sold in bags of soft, tender leaves minus the tough stems–perfect for this soothing soup! If you have leftover bread, you can grill it up with a little olive oil and serve on the side or make savory croutons for your soup. I know it’s not officially winter, but it’s getting cool enough to declare it soup weather, and frankly, I think all of our tummies could use a break right about now. This pot of comfort food will hit the spot! 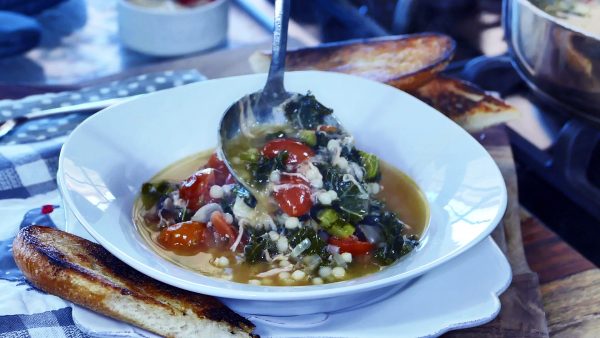