Sometimes there’s nothing like breakfast for dinner. Once in a while, it just hits the spot. When I came across a recipe for Sheepherder’s Breakfast in the cookbook Taste of Home’s Contest Winning Annual Recipes for 2006, it brought back my “breakfast for dinner” memories of powering through college homework late into the night at the University of Nevada, Reno. Sometimes before the all-night cramming sessions, a group of us would head to Gardnerville–about an hour south of Reno–to fortify ourselves at a Basque restaurant on a meal of baked eggs, chorizo and potatoes. It was very similar to the Taste of Home award winning recipe except that the Basque dish was baked in the oven in a cast iron skillet and Basque chorizo (or sometimes cured ham) replaced the bacon. It was soulful and comforting and satisfying and filling. Could you ask for anything more if you’re hungering for hearty meal? Sheepherder’s Breakfast, with all of its variations, is a popular dish here in the Southwest, too. Of course, fresh roasted or canned chiles are often added to a skillet dish like this one. Now with so many popular varieties of bacon on the market like peppered bacon, apple wood smoked bacon and the thicker sliced slab type, this variation on the Sheepherder’s Breakfast for Dinner will be tastier than ever morning or night. If you choose breakfast in bed for Dad, this might just be the perfectly delicious kick start to Father’s Day! 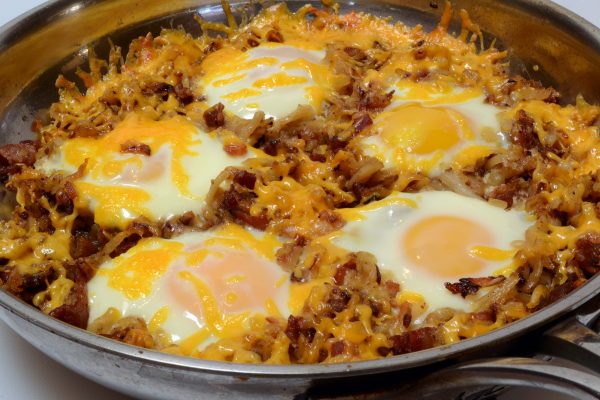