What are you hoping the spread will be for Big Game on Sunday? No, I don’t mean the point spread, I mean the snack table spread! Anything and everything deep fried, grilled, buttered, battered and baked, I’m assuming! From chicken wings and crock pot meatballs to deep fried pickles and football shaped brownies, the food at Super bowl parties are as much fun (and sometimes way more fun) than the game itself! While we’re considering the menu of all the things we want to dip and dive into, here’s a very simple Pepperoni Party Bread that is a real “slice ‘n diver!” You slice it up and plunge it right into your favorite red sauce! It all starts with refrigerated bread dough; either Pizza or French bread dough. It’s loaded up with thin slices of pepperoni, some tasty shredded cheese like gruyere, mozzarella or a combination of both. (For this recipe, you want the cheese to pull and stretch when you slice and lift it out, and both gruyere and mozzarella are great “pulling” cheeses! Some sliced peperoncini and some seasonings for added flavor and you’ll have super party bread for a super game day! 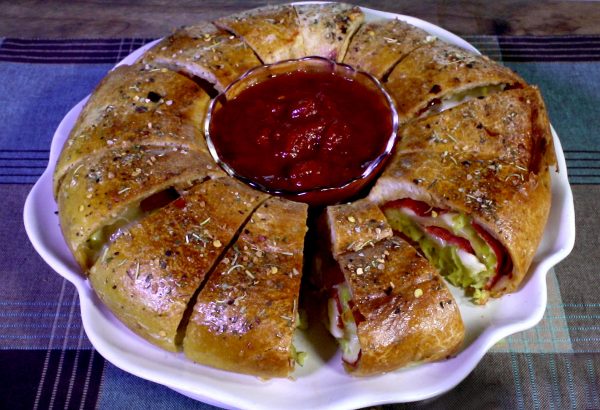 Note:
For larger party bread, dough the amount of ingredients except for the seasonings. (You will only need 2 tablespoons of seasonings for the larger party bread.) For the bread, combine 2 packages of refrigerated bread dough and spread out into one larger rectangle.