Everyone deserves a second chance and an opportunity to reinvent themselves. I think a recipe should have the same shot and this week’s dish is the perfect example. Panzanella is a Tuscan salad that was once considered a poor man’s dish, made of stale bread soaked in liquid (usually water) and tossed with tomatoes and vegetables. I remember the first time I tasted Panzanella. I was visiting friends in Orvieto, Tuscany, and my hosts prepared the salad by soaking the stale bread in milk. It was then wrung out in a clean dish towel and the bread was tossed into the rest of the ingredients. It was unforgettable and heavenly. These days, Panzanella has gone from a poor man’s dish to a very trendy feature on restaurant menus. Everyone has their own version of this bountiful bowl of goodness and here is yet another one. This Panzanella is made with large chunks of fresh bread (grilled, not soaked) and tossed with peppers, onions, shallots and a chile pepper. The traditional tomatoes were removed altogether. I love this version because it can be made ahead and enjoyed for days. It just gets better as the flavors meld. Panzanella, the poor man’s dish that got reinvented into a trendy plate, rich in flavor and nutrients! 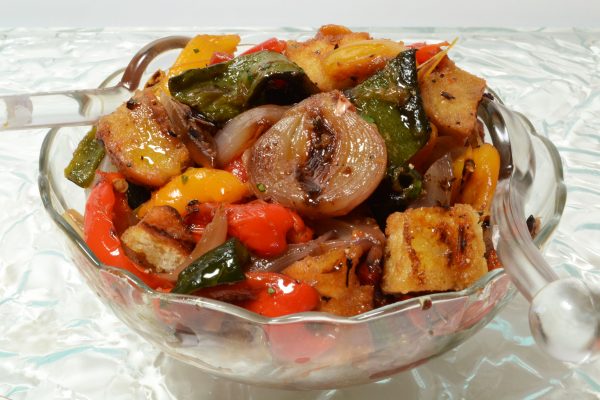