I first wrote about watermelon cakes back in 2015. They weren’t just cakes colored red. The watermelon is the actual cake, liberally coated with cake frosting. At the same time, another trend was emerging which quickly became the darling of wedding cakes, the Naked Cake. Tiers of unfrosted cake overshadowed the traditional elaborately-decorated layers of a wedding cake due largely to numerous postings on Pinterest. I thought it was time to unite the two trends with a Naked Watermelon Cake. The only icing you’ll use is in between the layers of watermelon and to keep the tiered fruit in place. By the way, if you’re wondering if icing really sticks to watermelon, it does indeed with an important tip which I’ve included in the directions. You can use any fruit that’s sweet and in season. For this summertime version I’ve opted for strawberries, blueberries and kiwi, with grapes and peaches as garnish. So head to the produce section and grab a nice seedless watermelon and go make a refreshing masterpiece! 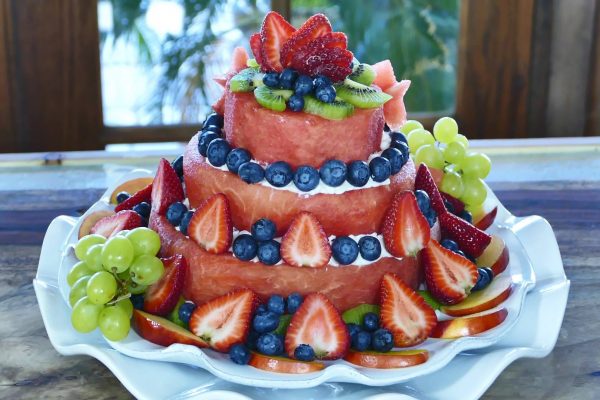