It all started in 1911. Next week, the National Orange Show in San Bernadino, California will be celebrating more than a century of citrus fun. This festival is the biggest and oldest event of the year in San Bernadino with crazy things like wild turkey races, a tractor pull and circus acts. Each year they have a pie contest, and I happen to have an old tattered newspaper clip from 1967 of the recipe from that year’s sweepstakes winner! It was stuffed in an old recipe box I bought while antiquing. This luscious Lemon Velvet Pie is truly is made the old fashioned way, by tempering the eggs and adding them into the hot custard. I couldn’t quite figure out how walnut halves factored into a recipe for lemon pie, but the dark walnuts set into whipped cream dollops on bright lemon pie certainly make it a stand out. It might even be the reason Mrs. Mary Gross, who is credited with this award-winner, decided to add them to the top! 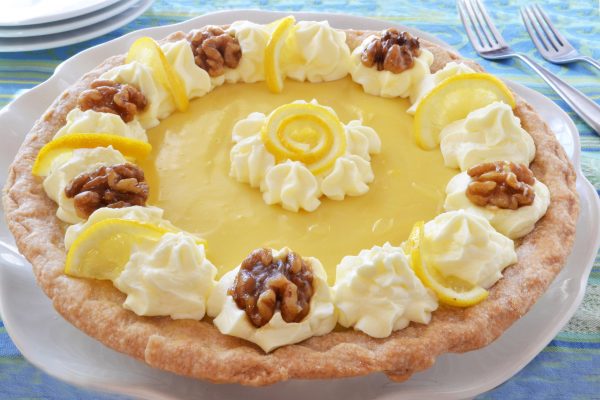 Another idea for Lemon Pie!

One of the most popular recipes with our Rescued Recipe readers is the Lemon Pie in a Blender. Yes, literally, everything gets thrown into a blender and then poured into a pie shell! If you missed that amazing recipe, you can find it here.