One this is for sure about the American palate. Our taste buds love to travel to exotic places. They lingered on Chinese food for years; then, Italian, Mexican, Pacific Rim and most recently with the Thai food invasion. These days, our flavor buds have acquired an insatiable appetite for Korean food; in particular, Korean BBQ. Five years ago, the term Bulgogi (grilled thin-sliced marinated meat) would have been as foreign as the most remote village on the Korean Peninsula. But today, Bulgogi is the new Big Mac. There is a lot to satisfy the taste buds with Korean BBQ, and the simple ingredient and ease of cooking makes for a happy cook, too! Here, Korean BBQ finds itself tucked inside warm, charred tortillas, making for an East-Meets-Southwest delight!

Watch my HOW TO Video for Korean BBQ Tacos here! 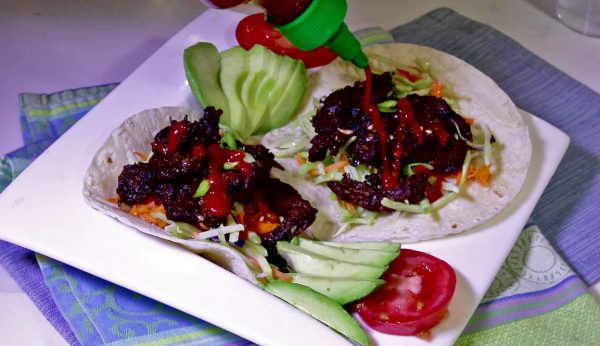 Votes: 0
Rating: 0
You:
Rate this recipe!
Ingredients
For the Korean BBQ:
For the Marinade:
Instructions
Recipe Notes

Note: Korean BBQ Tacos go well with coleslaw. Using store bought packaged cabbage for coleslaw, add a splash of mirin or rice wine vinegar, sesame seed oil, some sesame seeds, salt and pepper to slaw and stir to combine. Serve inside the tacos. This Korean BBQ recipe can also be served with rice.