It’s such an important recipe to the Irish, there’s even a Society for the Preservation of Irish Soda Bread. On its website, www.sodabread.info I learned an astonishing tidbit:

“Just like the bagpipes weren’t invented by the Scots, the chemical reaction that makes Soda Bread what it is, wasn’t invented by the Irish. The earliest reference to using soda ash in baking bread seems to be credited to American Indians using it to leaven their bread.”

Also, who knew there has been an Irish Soda Bread debate brewing for decades? In one camp, the belief that flour, salt, baking soda and buttermilk are the only ingredients in authentic Irish Soda Bread. Anything else added makes it a “Tea Cake.” The other camp roots for raisins in the mix. (This version is often called Spotted Dog.) Still, Irish Soda Bread is what people want, love and bake for St. Patty’s Day celebrations. Thanks to Maricopa resident Cathy Murphree, I’m sharing her delicious version of Irish Soda Bread that is not only tasty with a perfect crumb, but it also fits the requirements of true soda bread: It has to be quick, affordable and easy. (No yeast, no kneading and no rising involved.) The real surprise for me was that her bread has baking powder as well as the baking soda, which makes it rise even more! Here’s how Cathy came upon the recipe:

“Years ago I worked for Dr. Michael Patrick O’Shea, whose parents immigrated from Ireland. This is his mother’s recipe for Irish Soda Bread (best I’ve ever eaten). I met her one St. Patrick’s Day when she came to the clinic and brought the bread in for the staff. I asked if she would share the recipe and, thankfully, she did.”

Thanks Cathy! It’s Spotted Dog for me. And a Happy St. Patty’s Day to all of you lads and lassies!

Watch my How To Video for Irish Soda Bread here! 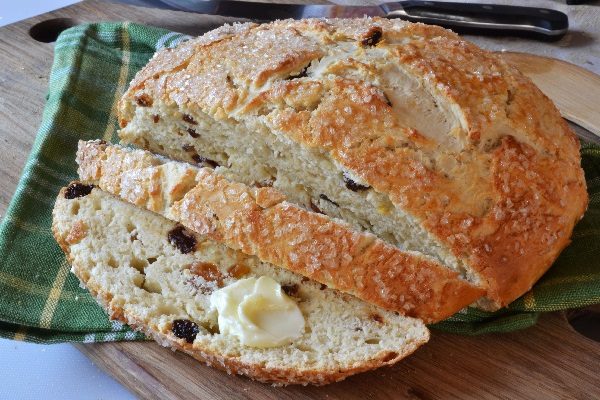 I finished my bread with decorative sugar applied after brushing top and sides with egg wash.