Collecting old recipes has connected me to hundreds of towns, churches, schools and civic organizations that have created cookbooks as a favorite method of fund-raising.They are bound and forgotten recipes often tossed in a box and sold for a dime at yard sales. That’s where I rescued the Willowbrook’s Favorite Recipes Cookbook. The book had been compiled by the Cookbook Committee for Willowbrook Estates, a retirement community in Garden City, Idaho. Inside was a tasty recipe for Homemade Baked Beans that couldn’t be more perfect for football watching, tailgating and backyard grilling. It was in the same section as Golumki Casserole which I was tempted to make just because the name made me giggle, but opted for the baked beans recipe because of one particular ingredient—a cup of strong brewed coffee. The rest of the ingredients are fairly common to homemade baked beans; molasses, bbq sauce, mustard and brown sugar. But I was curious to know what the strong brewed coffee brought to the flavor profile. It was delicious! I also used hickory smoked thick style bacon, Dijon mustard and for the hot sauce I opted for a teaspoon of Sriracha Hot Chili Sauce. This recipe makes up a nice sized batch so it’s perfect for a party, and a fantastic accompaniment to a hotdog, hamburger or grilled steak. I’m no bean counter, but my ten cent investment in the Willowbrook cookbook has paid big dividends just with this recipe alone for Homemade Baked Beans. 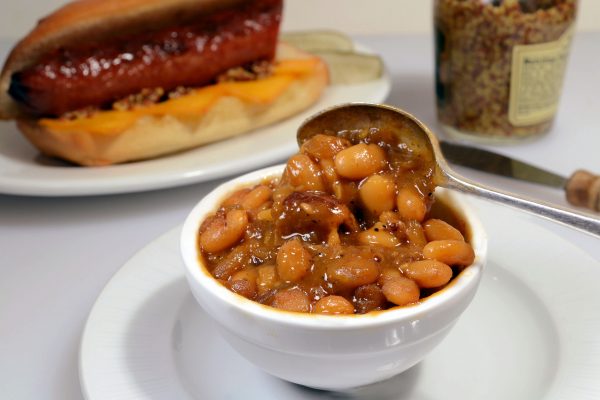