If you think that bread pudding is just a dessert, I’m about to change your mind in a delicious and surprising way. Imagine a savory soufflé-like bread pudding with a good quality ham (smoked is delightful), the sweet and slightly salty flavor of Gruyère cheese, fresh sautéed spinach and roasted red peppers all baked to perfection. This dish is so appetizing and versatile it can be enjoyed as a main meal or sliced in wedges for the perfect holiday party appetizer. Where did I find this sumptuous selection? In the Sing For Your Supper Cookbook compiled by the Sounds of the Southwest Singers. This 85-plus member non-profit volunteer choir has been singing in the Valley since 2010, performing a variety of music in concerts throughout the year. Members have sung at Carnegie Hall and Lincoln Center in New York City, and by the recipes in this cookbook, it’s apparent that this group can cook as well as they can sing! Make this dish and you’ll be singing for your supper too! 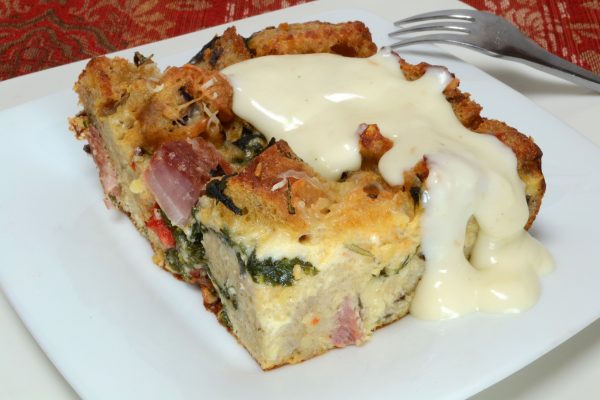