What a shame that it only gets attention during Greek festivals! This stew called Manéstra should be enjoyed all year long! Manéstra was entirely new to me. There’s only one word to describe this hearty meal–“Opa!” It’s that lovely Greek word meaning to celebrate with exuberance, but the ingredients and flavors in Manéstra are pure soul-food/comfort food in any nationality. It starts with braised and slow-cooked short ribs that create a fantastic red sauce where you’ll eventually let Orzo pasta soak up all the goodness in the pot! It’s absolutely mouthwatering. For this delectable discovery, I thank popular Valley musicians and recording artists Thano and Demitri Sahnas, known in Arizona as The Sahnas Brothers and Turning Point. Their Mom Kathy Sahnas had a hidden treasure that had been passed down from generation to generation that is so simple and welcoming, I couldn’t wait to dish it up and then get it into your hands! Enjoy the great flavor of this Sahnas family favorite.

Watch my How To Video for Greek Stew here! 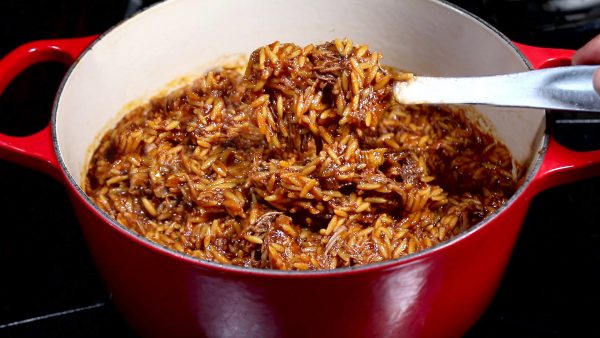 Votes: 0
Rating: 0
You:
Rate this recipe!
Ingredients
Instructions
For the Dutch Oven Method:
For the Crock Pot Method:
Share this Recipe