He produced and directed The Jungle Book. He directed Iron Man, Iron Man 2 and Elf. He co-starred in The Breakup and Couple’s Retreat. But when actor Jon Favreau starred in the movie “Chef,” it gave America a new obsession. We fell in love with The Cubano. Did see the movie? It’s a foodie’s dream. Chef Carl Casper, played by Favreau, gets sideways with a food critic and loses his restaurant job. His loss is our gain, because he revs up a new sandwich food truck called El Jefe, and introduces America to the new darling of the sandwich world, The Cuban Sandwich. Is that where the fad started? Or, was it just the Cubano’s time to get discovered by a larger food loving community. Somehow, I think the Cuban Sandwich is going to be more than a fad. I think it’s going to find a place in our hearts and on our plates. Why? Because it’s filled with all the things we love anyway; cheese, shredded or sliced pork, pickles, ham, bread and butter—and mustard! But what makes the Cuban Sandwich so much better is that it’s grilled and toasty and cheese oozes out and the bread makes a great crusty-cracky sound when you slice into it and it’s just downright delicious! Yep. It’s time for a new “hero” and the Cuban Sandwich is it! 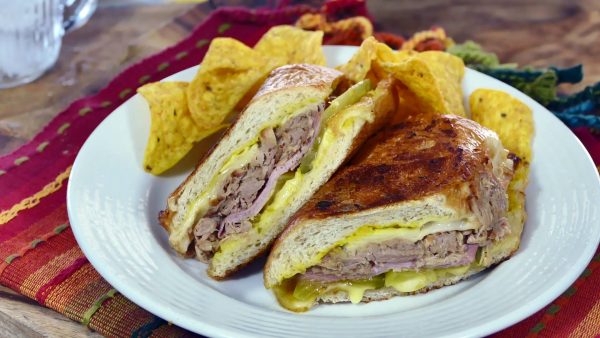 You can find prepared pulled pork in most grocery stores, but if you want to make it from scratch, this is a simple method.