It was sheer wizardry. I literally created something “magically delicious” (as the Lucky Charms leprechaun would say) out of thin air. Well, almost thin air. Ok, it was three ingredients, but out of those three ingredients came the most mysterious, unlikely and completely delicious creation called Gluten Free Cloud Bread. I wish you could’ve seen my face when I watched it form in the oven, or when I devoured one for the first time. It’s almost impossible to believe that a few eggs, cottage cheese or cream cheese and a pinch of Cream of Tartar could make bread that really tastes like bread but feels like a cloud. Even better, it stays that way for days, if stored properly. Is it just a fun and unique kitchen project to try with the kids, or is it legitimate bread that can be toasted, filled or eaten plain? It’s both, and that’s the beauty of Cloud Bread. I love experimenting in the kitchen, and the more I do, the more I understand how certain ingredients interact and combine and create beautiful flavors, textures and delicious dishes. But really, on this day, I was just a wizard making Cloud Bread, and you and your kids are going to have a blast being wizards too! 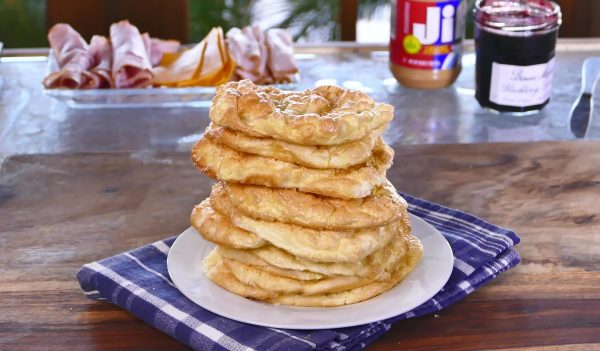 What the heck is Cream of Tartar?
Cream of Tartar is a kitchen staple used to stabilize whipped cream or egg whites when making cakes, cookies, pies, pancakes and meringues. But! Cream of Tartar can also be used as a metal polish by mixing it with lemon juice or distilled vinegar to form a paste. What does wine have to do with Cream of Tartar? It starts out as potassium bitartrate that crystallizes during grape fermentation inside wine barrels used to age wines. It is then purified and ground into powder.

Storing Tip: Store in a sealed container away from moisture, heat and light.