How in the world can you resist a dessert that’s called a Bubble-Up and Bake? Why did it take so long for this scrumptious idea to catch my attention? You take a tube of cinnamon rolls. You chop up some apples and toss them into a skillet. You mix together some cream cheese, powdered sugar and milk and whoa! You end up with a casserole dish of delight. It all started with me having a little extra time and a leftover tube of Pillsbury refrigerated cinnamon rolls. What magic could I possible conjure up? Apple Cinnamon Bubble-Up Bake, that’s what. It’s so tasty and simple you’ll wonder why it’s not one of your favorite go-to desserts. If you like peaches more than apples, go for it! I’ll bet you can even substitute cherry pie filling for the apples. Speaking of pie filling, I’ve included a recipe for 2-Ingredient Pie Cups using any of your favorite varieties of store bought pie filling. Now go bake and bubble up with joy! 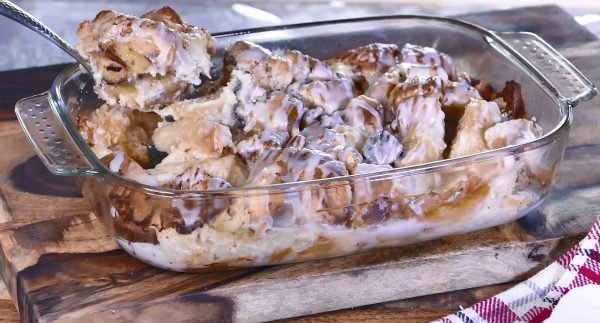