January begs for tummy warming and hearty comfort foods. January is also National Soup Month, and I can’t think of a better combination of comfort foods in one bowl than a chicken broth base turned into a creamy, cheesy and satisfying Potato Soup with Broccoli and Bacon! I love this soup because it starts with the basics, but you can cheese it up, spice it up and thicken it up just the way you love it. I did just that with this recipe. I toned down the heavy cream factor often found in potato soup recipes and opted instead for milk and then I kicked it up just a tad with a roasted Anaheim chile! (That chile was just what the potatoes needed to wake them up a bit!) We may not have much of a winter this year, but while we have chilly nights, this spud soup will hit the spot!

Watch my How To Video for Cheesy Potato Soup with Broccoli & Bacon here! 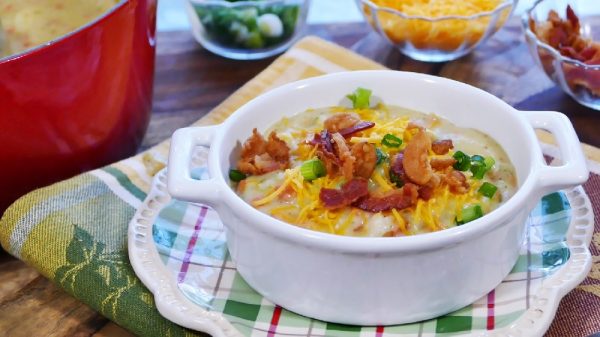