The Big Game comes with big appetites. Rooting for your favorite team, yelling at the officials, fist bumping after great play – it all makes a football fan downright hungry. So let me help by sharing a recipe that has always been a crowd pleaser, especially for a day as big as Super Bowl Sunday. Caramelized Ham and Swiss Baked Buns tends to resurface every few years, with new, updated variations on the theme. Basically what you have here is a casserole of hot sandwiches filled with ham and cheese and a sauce poured over the top. No, no. That’s not quite accurate. What you really have here is a slightly sweet billowy bun with a little slather of horseradish sauce, onto which black forest ham and swiss cheese is layered, and then a sweet and savory butter sauce does its magic in the oven. The tops of the sandwiches get caramelized and glazed, the cheese inside melts and melds with the horseradish sauce, and you find yourself in a situation where you just can’t pass one up. Yep, that’s a much better description. Now, as I’ve said, there are many versions of this recipe including potato or dinner rolls, but the classic version is the Hawaiian sweet rolls. The original recipe also calls for ham and swiss cheese for the filling, but substitutions have included turkey or pastrami. Also, horseradish sauce is often substituted for butter or mayonnaise. But I say, why mess with a good thing? Folks love this dish, and when you make it for this weekend’s big game, you’ll see why. 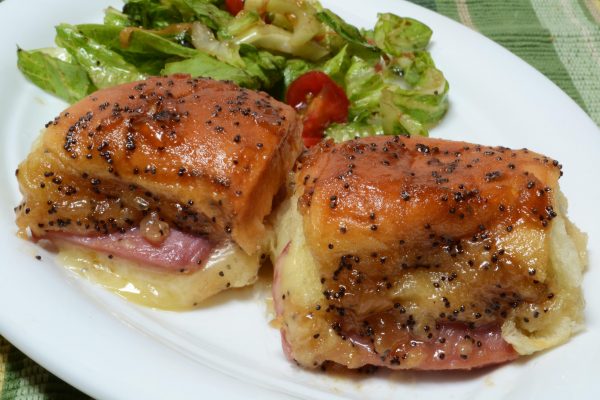