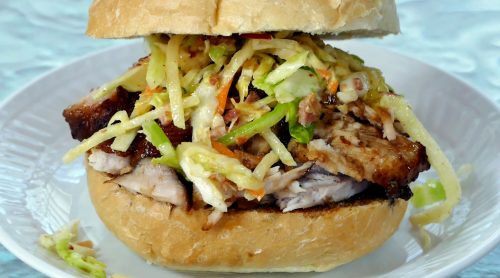 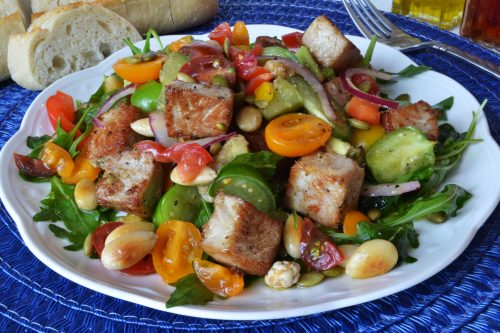 There is the classic Salade Nicoise with its lovely composition of tuna, tomatoes, sliced eggs, olives, potatoes, haricots verts and anchovies–or variations thereof. The tuna is generally canned, and there is very little in the way of lettuce leaves. Then, there is the more updated trend, the Ahi Tuna Salad, with its delicate strips of seared fresh ahi tuna, arranged in overlapping slices and serve on a bed of lettuce often with a wasabi-soy- mustard drizzle or a honey ginger vinaigrette. Combine the best of both salads, add a rainbow of color and crunch, and you have a hearty, healthful main meal dish with the unusual twist of fresh tuna served, not in slices, but rather in cubes to get the sear on all sides. If your New Year’s resolution is to eat healthy and somewhat preservative-free, the Over The Rainbow Cubed Ahi Tuna Salad is your creative and crunchy kick starter in a salad bowl! 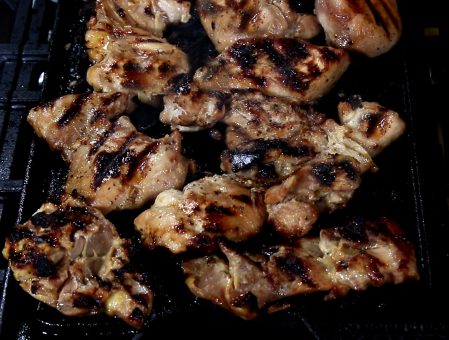 It’s one of America’s favorite take-out meals. Visit the state of Washington, and you’ll quickly discover that Chicken Teriyaki Seattle style has become iconic. I’m not sure how it became so popular in that region, or maybe I do. His name is Toshi Kasahara and he’s known as the godfather of Seattle style Teriyaki. What I love about Kasahara’s recipe is that it’s simple. Very, very simple. So that’s where I began with what I think is a fabulous recipe for Chicken Teriyaki. There is one additional ingredient added to Seattle style teriyaki, toasted sesame oil.  It seems to smooth out the flavor and bring in a touch more of the Asian influence. Although Chicken Teriyaki’s predominant flavor is soy sauce, there’s another ingredient that I think is the rock star in the sauce. Mirin is a sweetened rice wine similar to sake, and it’s the perfect companion for the salty soy sauce.  The Teriyaki comes together pretty easily. The liquid gets heated on the stovetop, cooled and then blended with garlic cloves, fresh ginger and the sesame oil. Now for the chicken. Sorry white meat lovers, but it’s gotta be skinless, boneless chicken thighs. There are three reasons for that; flavor, flavor and flavor. Having said that, if you must have chicken breast instead of thighs, I think the teriyaki sauce will save the day. It’s just that tasty! So, if you routinely order Chicken Teriyaki for take-out, give this recipe a try. I think it may stack up nicely to your favorite Japanese grab and go!

Watch my How To Video for Easy Chicken Teriyaki here! 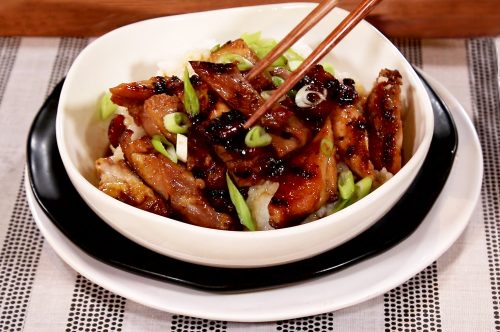 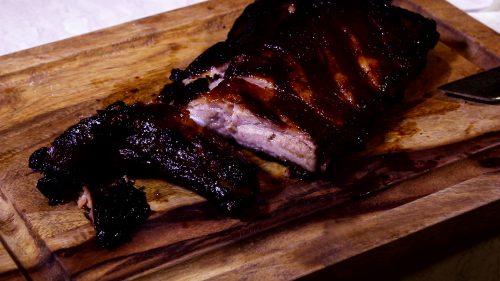 Church fund-raising cookbooks are generally compilations of recipes by the family and friends of the church-goes. But in the case of The Bishop’s Bounty Cookbook; Food from Heaven that Tastes Divine, the book highlights the life, accomplishments and abundant recipes of the Bishop himself, The Most Reverend Charles Pascal Greco from the Diocese of Alexandria, Louisiana. I like to think that finding this old cookbook was a gift from above, since it has so many easy and delicious dishes in it, many of which are Father Greco’s authentic recipes. Throughout the chapters, you not only get great meal ideas but also a glimpse into one life that accomplished many things. Father Greco, born in 1894, built churches, schools, camps and even a ninety-six foot ship for “children to play and adults to sit and relax.” The Star of the Sea took five years to complete. But more than anything the Bishop loved to cook and share his recipes with anyone and everyone one. I chose the Chinese Barbecued Ribs because it’s so simple and savory! It makes enough to load up a platter and share, a notion that I think Father Greco would find absolutely heavenly. 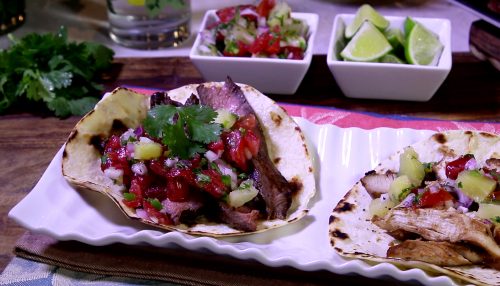