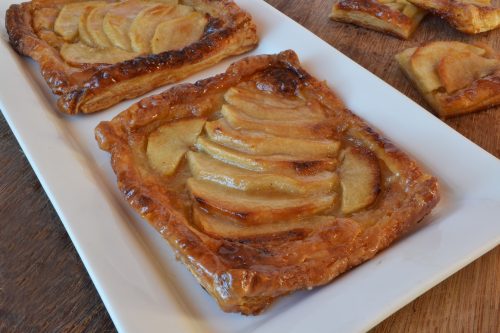 So I find myself, once again, in the middle of a “whodunnit.” Who really invented the flakey, delicate, butter-ladened layers of dough we’ve come to know and love as puff pastry? The French will say it was invented by a French apprentice bakery cook named Claudius Gele in 1645, who brought the recipe to Florence where it became wildly popular.

Ah, but the Italians cry foul and say that puff pastry was already being made in Italy long before that – as early as 1525 – and they say there is a document to prove it!

For this beautiful apple tart, made with puff pastry and caramel sauce, I’m staying out of the argument and focusing on thawing the dough, slicing the apples and baking (at least I know where apples come from – thank you, Johnny Appleseed! Maybe…)! This apple tart is simple and elegant, a sweet that is perfect with coffee in the morning or as a satisfying dessert any time of the day. The only important do-ahead is to take the puff pastry out of the freezer and let it thaw in the refrigerator overnight. I think that once you make an apple tart like this, it will become one of your treasured treats. I say let the French and Italians duke it out over this one, and we’ll make apple tarts and not war!