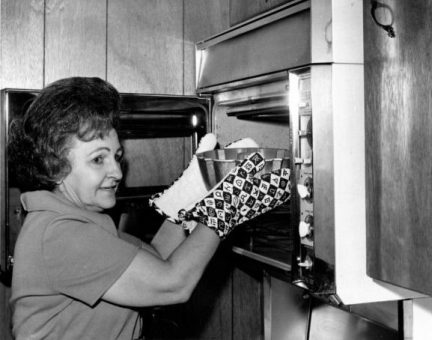 Passion, romance or chocolate. Which do you prefer for Valentine’s Day? It’s not that we don’t love Love. But dang it if chocolate doesn’t steal the ol’ heart, right? So just in time for Valentine’s Day, I’m featuring an iconic dessert that actually put the Bundt Cake on the culinary map. It was 1966 at the 17th Annual Pillsbury Bake Off Content. She wasn’t even the first place winner, but Ella Rita Helfrich set the world on molten chocolate fire with her second place winning Tunnel of Fudge Cake. Up until Ella pulled her cake out of the oven, the Nordic Ware company was not having great success with their unusual invention, the Bundt Pan. In fact, they were about to discontinue the line due to lack of sales. What a difference one day and one cake can make! The recipe was such a smash hit nationwide, that the company had to make 30 thousand pans a day just to keep up with the demand! So this fudgy cake is not just a lavish, chocolately gooey-centered yummy work of art, but it was actually responsible for the whole Bundt Pan craze! The cake itself proved just as popular as the pan. But then! Pillsbury discontinued the crucial ingredient to the cake’s success, Double Dutch Frosting Mix, and angry fans of the cake deluged the company with complaints, prompting Pillsbury to adapt the recipe, replacing the frosting mix with cocoa powder and confectioners’ sugar. Ella won $5,000 for her creation, but its unique mysterious chocolate tunnel, brownie-like consistency and silken chocolate topping makes is worth a million bucks which, incidentally, is what the winner takes home today! So, again, let me ask you. Passion, romance or chocolate? Read on! 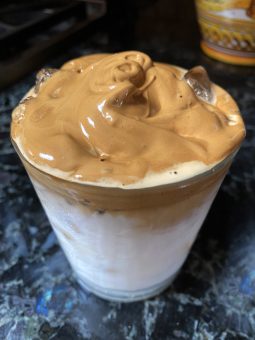 As TIKTOK goes, so does the youth of the world. The short, often dazzling video clips have hooked us on everything from dare-devil stunts to over the top recipes. As a recipe creator, I’ll admit I’ve been hooked and reeled in a number of times, and I’ve learned the hard way that many TIKTOK food videos are fabulous eye-candy, but lacking in accurate ingredients or technique. Not so with DALGONA, the newest TIKTOK trend. It’s whipped coffee that, with only 3 ingredients, makes the most delightfully luxurious, frothy caffeinated foam! The word Dalgona comes from the Korean candy made with melted sugar and baking soda. Whipped Coffee has the same caramel color with a powerful hit of coffee flavor. It’s so fun and easy to blend up, and my advice is to start with a delicious instant coffee or espresso. The better the coffee, the better the Dalgona. Also, this method works beautifully with sugar substitutes like Monkfruit and Allulose. It’s delicious over iced coffee, milk or a hot cup of Joe. I was thinking that you’ve gotta have a great coffee cake recipe to go with your Dalgona. Enjoy both!

It’s one of the most colorful traditions we have, and it all starts on January 6th, the Feast of the Epiphany celebrating the visit of the Magi to the Christ Child. The Three Kings Cake, with its colorful adornment of beads, a plastic baby hidden inside and topped with a king’s crown also kicks off the Carnival season with Fat Tuesday, aka Mardi Gras. With this treat, you’ll be feasting your eyes on fun!

Watch my How To Video here! 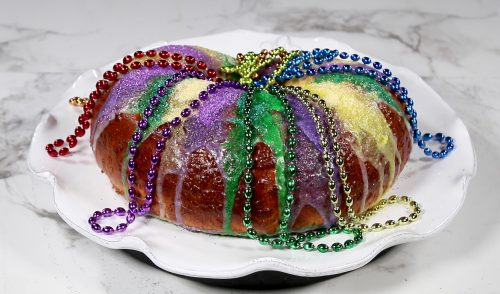 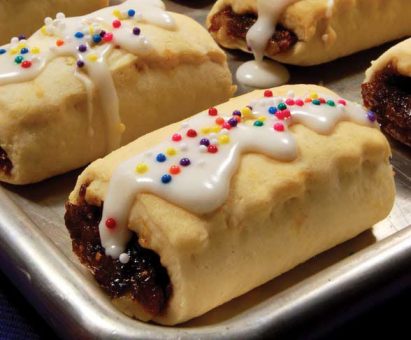 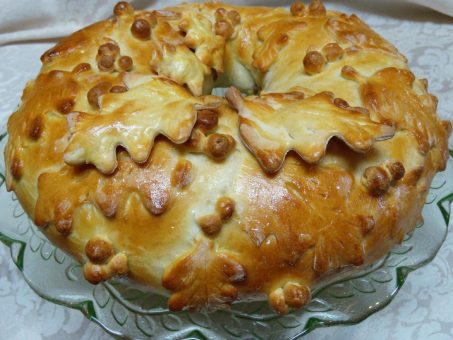 This one is personal! I’ve been making my special wreath bread for the holidays ever since I was in high school. I love making it, I love cutting into it (as pretty as it is) and I absolutely love giving it away as a holiday gift from my kitchen. I think I cut the recipe out of a Women’s Day Magazine many, many years ago, and eventually the clipping just disintegrated from overuse. By the time that happened however, I had the recipe embedded in my cooking DNA. The inside of this gorgeous bread wreath is filled with delicious surprises like brown sugar, walnuts, soaked raisins and spices. The outside is a thing of beauty and in my opinion, the perfect holiday wreath to share! Enjoy it as a breakfast bread or a sweet snack anytime!